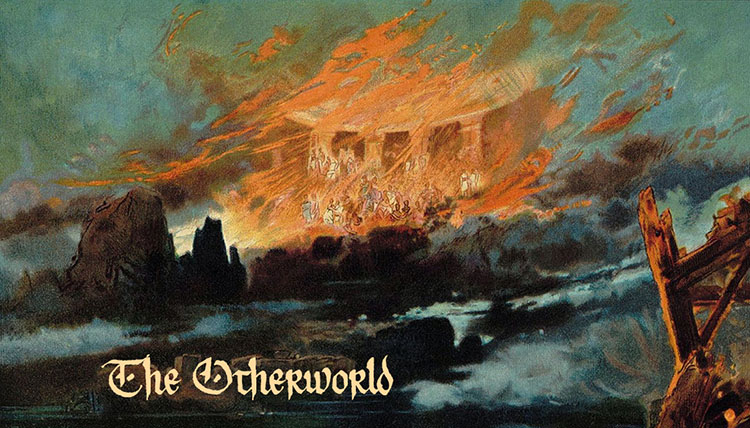 The Otherworld is a collective term for the realms beyond the earth. From the Shining Realm to Hel, they are the domains of spirits and the Immortals. Connecting them all is Midmeither, the mighty World Ash. The worlds hang like succulent fruit from Midmeither’s branches, or fat tubers at its roots.

Roads connect some of the realms: The Perleveien winds its way from Middarmark through the realm of Nidavellir to the Gates of Helheim, the Dry Lands. The Rimveien begins in Middarmark and travels through the Endless Ice and perhaps all the way to the Shining Realm. No road exists for some realms; they must be reached by climbing Midmeither itself.

Of all the realms, Aether lies closest to the Middarmark. For most people, Aether and the Otherworld are synonymous. It is a mirror reflection of the mortal world. All rocks, streams, fields and houses are living spirits there. A boulder in a field in our world is a living spirit in the Otherworld.

Aether is the source of all magic. When a magician casts a spell, the magic stems from Aether. Teleporting wizards travel through the Shroud Between Worlds as they pass from one aetherial shadowgate to the next. The power that magical items and weapons draw, including all magical enchantments, also originates from Aether. When the dvergar fabricate astounding tools, implements, and weapons, they use their forges to access Aether and imbue magical properties onto the item.

Alagablettur—places where the Shroud Between Worlds is naturally thin or has been torn as the result of out-of-control or especially powerful magic, the visitation of an Immortal, or some similar event—most often connect to Aether. Strange happenings spurred by the magic of Aether, like floating rocks or blinding light during the night, occur in the vicinity of these peculiar spaces.

Not far from the Shining Realm, the elven homeland of Alfheim has been sealed off and is inaccessible from the other realms. The alfar living in the Middarmark were exiled from the realm for an unspeakable crime and were forced to leave their fair land. Although the alfar never forget, none will speak of the reason.

Alfheim is a luminous realm, with streaming bands of light washing over the forests and fields. Rivers sparkle with a golden, inner glow, and decorated, high-arched bridges span wooded valleys. Time flows differently in this environment—perhaps a little slower than in the other realms.

Dreamers almost never awaken, but if one does, it's usually only for a matter of hours or a day at most. Often, during these brief periods, the dreamers will reminisce and fondly remember Ljossalfheim—their city in the clouds. They remember the music and songs that once filled the air and long to return, but most of all, they remember the dreadful shadow overtaking the realm when they fled.

Accessed by dreaming, the Vale of the Dreamer borders Alfheim. For those that can reach its dreamgates, one need not be as concerned with matters of the flesh or material concerns such as eating or drinking while in this realm. More concerning, however, are the nattmara, or nightmare spirits, rising from this realm.

The superficial appearance of the dream realm varies for each person. For some, the land appears murky and dark. Strange and twisted images distort and contort reality. For those that can conjure vivid experiences, fragrant fields of wildflowers might assail the senses.

Yet, the Tower of Seven Dreams remains consistent for all. The tower stands in the center of the realm and is visible from every corner of the world. A maze filled with deadly plants, creatures, and murderous traps surrounds the walled gardens encircling the Erlking’s tower.

Eldheim, also known as Muspell, is a primordial realm of fire. The Land of Flame was instrumental in the creation of all life. The fires of Eldheim melted the ice of neighboring worlds and flowed across the void.

It is a realm of quenchless fire and unspeakable heat. Filled with lava, flames, sparks, and soot, Eldheim is the home of fire giants and fire demons.

A giant named Eldr rules Eldheim, while Aurgelmir’s descendants and minions await the Twilight of the Immortals to battle with the Asar. The army stands ready to invade the Middarmark bearing swords that blaze brighter than the sun.

Hel, the domain of the dead, is located beneath the roots of the World Tree. Most of the realm is dark, cold, and gloomy. However, some of the territory is quite pleasant. If relatives provided the deceased with Hel-shoes, one might walk the Helveien unharmed. Otherwise, passage across the Dry Lands is terribly painful.

The Elivagar, the rivers of Hel, find their source in Hvergelmir, the spring in Helheim near Midmeither’s roots. The River Gjoll flows near the Gate of Hel and separates the land of the living from the dead. It is crossed by the Gjallarbru, a bridge thatched with glittering gold. The Slidr is a river of swords—full of irons and razor edges.

Ancestors of the dead await at Eljudnir, the name of the Hidden Halls, and the Black Gate, called Fallandaforað, surrounds the hall with a single entrance. For those trying to find their way through Hel, their ancestors call to lead the way. Some never make it to Eljudnir and wander aimlessly or return to the Middarmark as a revenant. The Skyrnir call the Dry Lands the Land of Heroes, and it is a reminder of the tribe’s first home from a far-distant land.

Eljudnir can be quite comfortable if the descendants take care of their ancestors. The Hidden Halls contain many manses and steadings where the ancestors live much as they did in life. For clans that consistently make offerings, ancestors will be better off. Otherwise, poverty awaits those that are forgotten.

It is possible to bring the dead back to the Middarmark. One must first travel to Hel via the Perleveien from Nidavellir to the Helveien or invoke a supplication to transport directly to the Queen of the Dead’s castle. There, one must persuade Queen Halja to negotiate the release of the dead.

Harpa, Lady of the Sun, the daughter of Sol the Day-Star, is born anew each year after Sol’s release from Helheim.

As the first of the realms, Jotunheim is the home of the Jotnar. Beyond the mighty glacier Scathach and the far marches of the Middarmark, one can walk into Jotunheim—a magnificent land of ice, mist, and snow.

However, crossing the great ice road Rimveien to Jotunheim is a harrowing journey. Lacking suitable fords for non-giant folk, deep rivers inhibit passage by land. Beyond the frozen wastes, jagged cliffs stand like grim sentinels guarding a stronghold made of ice. Powerful magic permeates the wilderness from the forbidding and dreary shores to the crystalline ice columns beyond the tundra. Blizzards are suddenly summoned as if by magic and can last for days.

The Endless Ice is home to a vast empire of ice giants. The Jotnar, the other primordial children of Aurgelmir, were the siblings of the Old Ones. They descended into the world after creation, which is why the Middarmark has mountains and seas and winds and fire and ice.

Long ago, there was neither sand nor sea, nor waves nor sky. Then, Aurgelmir’s death at the hands of three of his children set off a series of events that created the Middarmark. With daggers still bloodied, the Old Ones’ preeminent act of creation connected Otherworldly realms through the Middarmark—the center of all worlds. The Old Ones placed Midmeither, the World Tree, atop the tallest mountain of the Middarmark. The World Ash’s roots and branches extend to all of the realms to serve as a crossroads. Wrought from the bone and flesh of Aurgelmir, the Middarmark is now home to many folk, spirits, and trolls. Now, surrounded by an endless ocean, Middarmark is a vast world.

Nidavellir the Great is the kingdom of the dvergar ruled by King Throin. The Below is a realm full of clan houses and soaring palaces with gem-studded walls of silver and stone. All day the dvergar toil at their forges, mines, and crafting tables.

Nidavellir can be reached from many places if you know where to look, but Frostfast Hall is currently the closest outpost near the surface. Over the ages, there were other outposts and entrances, but they have all since been lost to time or tragedy. The Perleveien is the road upon which all of the great cities of Nidavellir sit, and from it one can walk from Frostfast Hall to the gates of Helheim. The jeweled, mosaic tunnel begins at the Gate of Frostfast Hall at the Tower of Nain and descends into the mountain Nihd.

By climbing Midmeither, one can ascend to the Shining Realm and the home of the Asar—the descendants of the Old Ones.

The Asar built a magnificent, high-walled fortress atop a gleaming cloud to defend against Aurgelmir’s other children. It is a wondrous place where blights do not fall upon the fields, and the harvest yields a plethora for the multitudes.

The largest building is a noble mead hall made of pure gold and filled with beautiful carvings and columns cast in metals. The mead hall is known for its unimaginable feasts and celebrations. There is no wanting or hunger in this realm, and the joyous skalds sing of the creation of the world.

However, the Asar prepare for the coming battle with the Jotnar. Below the hall, the Asar store treasures of incredible power in the vault. In the center of the inner sanctum, a great smithy—fully stocked with tools and implements—crafts weapons and the instruments of war in anticipation of the final battle.