Although actual historical places loosely inspire the neighboring lands, they are not meant to be exact analogs. These locations are amalgamations with various cultural touchstones to connect to your campaign if you so choose. The Middarmark book offers a glimpse here and there into these foreign lands and provides plenty of flexibility for whatever you imagine.

Gottland, the Gott homeland located across the Skyet Sea to the east and south from Rimholm, shares a border with eastern Svanland. It is a war-torn country where reddened spears settle long-standing feuds.

The Gotts require vast ranges for their horses to graze, and their feudal order depends upon rewarding territory to the landed nobility. The Gotts organize the warchief’s vassals of a grevskap under the governance of greves—the equivalent of Bjorning jarls, and the barunar—the inspiration for the Bjorning lendermenn—rule individual holdings.

Gottland possesses wealthy ports and trading hubs. However, the Gotts are not natural sailors and do not take to the seas lightly. Over the years, the Havn League has spread across the ports of Gottland and increased horse and salt exports.

The Gotts have had several migrations where a warchief leads their ridders to stake a claim to new lands. Twenty years ago, Warchief Otkell invaded Vanskral with a warhost to carve out a territory in search of greener pastures. Now, from a new home called Gottmark, Warchief Otkell and his five greves push southward toward the Vimur river, Vargstrond, and ever closer to Rimholm. 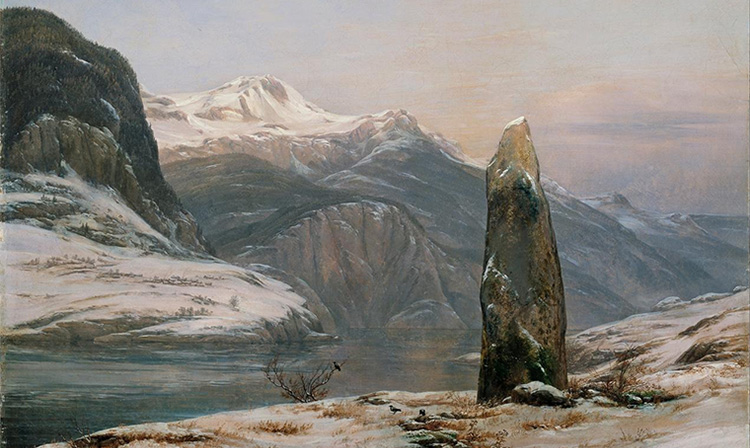 To the west, there is a sparsely populated, sprawling, and inhospitable archipelago. The biggest island has a central plateau of sand, rock, and lava, with mountains and glaciers around the coastline. Glacial rivers flow like Aurgelmir's blood through the lowlands, and stern snow-winds assail meager farmlands along the coast. Legends speak of a great cataclysm that left behind the crumbling ruins of ancient civilizations and the remnants of the Ylfarings. Scattered beneath the hinterland, fragments of forgotten peoples—relics, artifacts, and treasures—lie buried in extravagant ancestral tombs and chambers.

Holmsea has a long history, and various and diverse peoples have called it their home since the birth of the earth. Over the last few centuries, there have been increasing waves of Grælings fleeing to Holmsea to escape wars and invasions. The Grælings brought with them their traditions, customs, and enough thralls to construct the new settlements. The Grælings have instituted a clan-ruled state with autonomous families controlling independent steadings.

Some of these lords held vast swaths of land and held titles as kings or queens, but that era ended during the Bjorning conquest. Shortly after Bjorn Longfarer’s death and Bjornar the Grim’s treaty with the dvergar, Sigrun led the warhost on a conquest of Holmsea. Blood flowed fast on the Bjornings’ blades. Holmsea mounted a valiant defense but did not have the numbers to stand against Sigrun’s warriors. After the death of Sigrun and Bjornar about five winters later, Svanland rescinded its tribute, and Holmsea ceased at that same time.

Most of the steadings are fishing villages that rely on the sea, and they mostly export herring and cod. There are a few significant Havn League ports in Holmsea, and a couple of influential merchant families have lucrative trade deals with Stortmarke and the ports of northern Svanland. 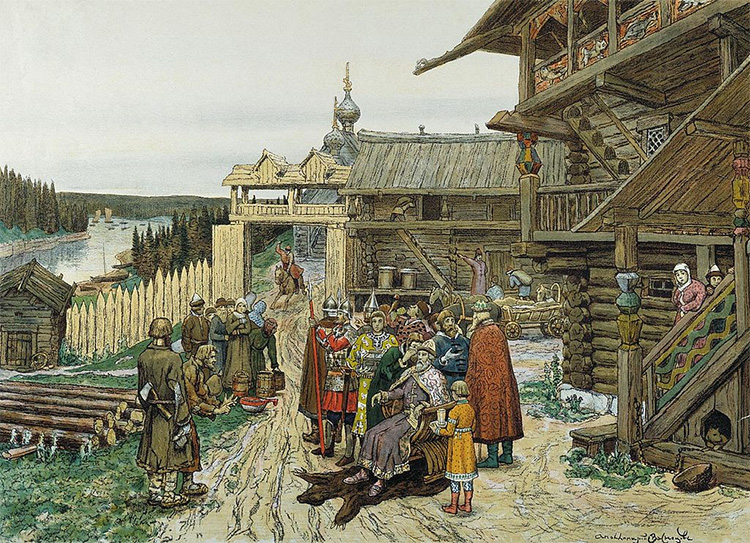 Far beyond the Skyet Sea to the east lies a boundless territory of plains, fields, rivers, mountains, and fair winds. Between the calm waters of the Oster River and the turbulent tides of the Sea of Beasts, Ostergard has several trading cities connected by canals and streams that span the entire land. A vast network of tributaries makes it easy to return from raiding with goods to trade. The largest river port is located on the Oster River and is a large fortress and mercantile hub. The town started as a base of operations for raiders and pirates but has grown into a bustling metropolis.

As the meandering lines of the rivers converge into mighty rivers, many of the towns of Ostergard are busy crossroads that blend cultures and traditions. Given the similarities in their seafaring traditions, it should be no surprise that the Bjornings and Scefings draw common ancestry to the people of Ostergard. The tribes are always searching for valuable knowledge, magic, and lore. For the scholars of the Middarmark one richest treasures was the runic alphabet Oster script imported from distant lands to the east.

The rugged land is said to possess a fierce host of warriors and cutthroat merchants, but the economy depends on a vast thralldom. By exploiting slave labor, several powerful families have accumulated riches beyond imagination and built extensive trading hubs that are incredibly wealthy and well established. Ostregard’s ports trade an endless supply of lumber, and also do well selling amber and silver. The Græling princes of the Havn League have not made any inroads yet.

South of Stortmarke across the Regn Sea, Svanland extends for as long as one can travel. Svanland is comprised of large villages with complex defensive alliances. Enclaves of Græling refugees and some Skyrnir exiles who fled from the Bjornings and Gotts are not welcome by the peoples of Svaland but manage to eke out an existence in the north. Scefing raiders maintain dozens of outposts exclusively along the coast near Toskarinn where Tusk slavers operate from hidden coves guarded by treacherous reefs. Beyond the northern mountain range and deep in the interior, several well-populated tribes clash over contended territory with heavily armored armies and frightening machines of war.

Sigrun’s campaign in Svanland was very bloody, with the majority of the fighting taking place at the frontier's edge. Sigrun’s war band fought through two winters before forging a tentative peace in the territory. Exhausted from the carnage, the settlements agreed to pay annual tithes at the war's conclusion. However, just a few years later, after word of Sigrun’s death at the Battle of Sakki Downs, the defiant clans quickly ceased their tribute to the Bjornings and stopped sending messengers to Rimholm.

The Havn League dominates the ports of Svanland. With plenty of trade goods to offer, Svanland is known for its expert craftspeople capable of making sophisticated arms and armor. Excess copper and iron exports sustain lucrative profits, but with all of the wars and captives, greedy merchants exploit opportunities to cash in on selling thralls.

On Valland, the flesh of Aurgelmir takes the form of sheer, rocky cliffs and bountiful fields that yield unimaginable harvests. Many of the land’s strongholds are made of stone and impregnable by infantry, and the nobility enjoys unprecedented prosperity off of the toils of their indentured servants. However, the villages beyond the protection of these fortresses are ripe for plunder, and during these raids, many of the neighboring tribes seize thralls from the coastal towns and cities.

The people of Valland have a long history separate from the wars of the Sakki, Grælings, Bjornings, and Gotts. Skyrnir and Græling exiles are a minority in this land, and the traditions of the majority are strange and foreign. The people hold up their own Young Lords and praise ancestors with unfamiliar sounding names.

As far as one can tell, Valland started the concept of taxes—an idea that spread to Rimholm only recently. With coffers filled with coin, Valland's cities are wealthy and well-developed. Many of the townsfolk form a literate class, but in Rimholm, only a handful of scholars can write. In Valland’s towns, the stewards keep libraries of records written in stacks of tomes and ledgers.

Valland has several established Havn League ports. Valland’s main exports are fabrics and grain. Cloth exported from Valland is stamped with a seal of authenticity that allows the League to charge more for the finery. However, local merchants and traders resent the success of the League and their exclusive negotiating privileges.

by Joseph Wright of Derby

Vestreyjar is an archipelago of volcanic islands. Although several of the smaller islands are uninhabited except for hunting cabins, the larger islands have patches of fertile land for farming or even livestock. Most of the islands are rock stacks and skerries with some volcanic activity. There is even an island comprised entirely of red sandstone.

During the nightless summers, where complete darkness is unknown, there is always a dim, hazy twilight. Most creatures flee to caves, and trolls rule the depths through interconnected tunnels. However, during the winter, night claims half of the day while the malevolent creatures of Chaos siege the villages' palisades.

Although sparsely populated, many ancient people, creatures, and beasts have made the islands their home. Signs of long-extinct civilizations built atop civilizations take the form of a round stone temple dedicated to the moon, several sites of standing stones, and monolithic grave rings. Many of the villages still speak in the tongues of their ancestors, but the people are familiar enough to converse in several languages.

Many outlaws call Vestreyjar home. Some have brought their families or clans with them, others have bonded together with escaped thralls to form new communities. Having fled during the Bjorning wars, several Skyrnir bands and Græling exiles live here as well. Over the years, Bjorning explorers built small shipbuilding villages, and the Scefings’ pirate camps have grown into fully-fledged settlements.

The Shroud Between Worlds is thin on these islands, and terrifying sorcerers and isolated shamans live on some of the wild islands. Their weather magic can raise storms on the sea and many can shape-shift into mighty whales. The Whaling Rock is a small island where two such competing magicians famously dueled. One wizard transformed into a whale to escape while the other turned into sharp rocks to impale it.

Vestreyjar primarily trades with Valland, but also ships exports to all of the Havn League ports. The waters provide ample fish, whales, and seals for trade. However, pirates take advantage of small fleets and prey upon ships crossing the Sea of Vestreyjar that separates the islands from Valland.